Willie K. Ramirez
Tuesday, September 11, 2018
Facebook Twitter
Loading...
Loading...
This loaded chicken bacon spinach pasta dish is tossed in a thick and creamy garlic Parmesan  sauce. It’s a perfect blend of flavors that will make you think you’re eating at a restaurant!
This tastes like it’s from a restaurant.” Ahhh…music to my food blogging ears. Thank you hubby. He doesn’t lie either. In fact, he’s brutally honest about my recipes. But this one, is undoubtedly a keeper. The fresh tomatoes and spinach pair perfectly together, and I never met a creamy garlic Parmesan sauce that I didn’t like, the chicken gives this pasta dish the protein that it needs, and finally, the bacon. Who can really say no to a loaded pasta dish that’s topped with crispy bacon? I really don’t think that anyone could. 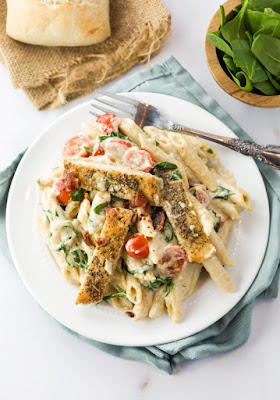 I personally love to prepare this meal in a cast iron skillet. Searing the chicken in a cast iron skillet helps set the tone for the rest of the meal by giving the pan a ton of delicious flavor that you later use to cook the sauce in. It’s part of what makes this pasta dish so incredibly flavorful.
Ingredients