Willie K. Ramirez
Sunday, September 9, 2018
Facebook Twitter
Loading...
Loading...
I love soup – obviously – but it’s so hard to narrow down a favorite – I seriously make soup at LEAST once a week, but THIS – cheddar broccoli soup – will ALWAYS be a go to. I judge all soup and sandwich places by their broccoli cheese soup.  If they don’t have a good one I never go again.  I mean seriously – it’s such an easy soup that if they can’t make a good one nothing else is worth trying IMO.
Now some people are purists and JUST want a thick cheddar soup with broccoli – but I like to add potatoes, onions and carrots – I love the added texture of the grated potatoes in the soup – and to be fair too much plain cheddar soup is BORING, so the other veggies bring a texture and flavor I adore. Now I like the potatoes and carrots grated – I like it better than chunks in this one soup – BUT I like to grate them BIG, not little grates (I use this shredder but use whatever you have) 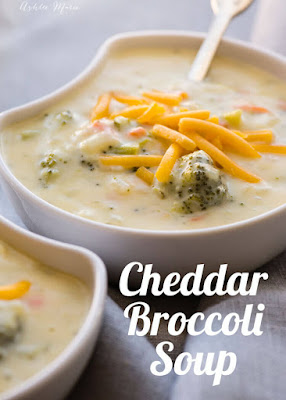