Willie K. Ramirez
Saturday, August 18, 2018
Facebook Twitter
Loading...
Loading...
3 Ingredient Mousse that makes a Heavenly, Showstopping Dessert – Chocolate Orange Mousse is my new favourite treat!
So, recently I posted my No-Churn Terry’s Chocolate Orange Ice Cream, and my Creme Egg Chocolate Mousse. In both posts I show that a simple recipe for a N0-Churn Icecream, makes an amazing mousse! Combining the Cream, Condensed Milk, and Chocolate or choice and whipping it together makes a delicious treat. I decided to post this as a new recipe anyway, so that people can find it and making it without having to read an ice-cream post! 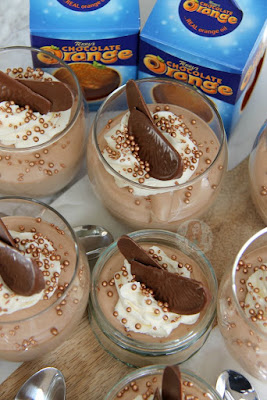 Honestly, its so damn delicious. I honestly question why I have never tried it before! The recipe takes care of itself… the sweetness from the condensed milk also takes care of the sugar you need. It gives the recipe thickness as well. The cream is the necessary dairy part, to make the mousse or the ice cream version. Using some melted down Terry’s Chocolate Orange and then whipping the mixture together makes it the best thing EVER.
Ingredients

INTRUCTIONS :
1)Chop the 225g of Terry’s Chocolate Orange up into small chunks and melt carefully in the microwave, or in a large glass bowl over a pan of simmering water. Let it cool for a couple of minutes.
2) Pour the Melted Chocolate, Cream, and Condensed Milk into your mixing bowl and whisk until a thick mousse like texture is formed, and it holds itself – this can take up to 5 minutes!
3) Pipe/Spoon the Mousse into some Mixer Glasses, and leave to set in the fridge for 3-4 hours.
4) Once set, whisk together the extra double cream, and the icing sugar. Pipe onto the mousses using a 2D Closed Star Piping Tip. Once piped, add some sprinkles, and some extra Terry’s Segments to the top.
ou can use any flavour chocolate you want instead – you don’t even have to use Terry’s Chocolate Orange.. you could use the Lindt version instead. Or, you can use Dark Chocolate in this recipe instead of Milk, but I wouldn’t advise using White as it would be far too sweet!
These will last in the fridge for 2-3 days, but are delicious when freshly set. Even the mixture is delicious!
You could add in some extra orange if you wanted, but I like it the way it is. You can also fold through some chopped up chocolate as well for texture, but they’re moussey and delicious the way they are!
More Deliciouse Recipe TERRY’S CHOCOLATE ORANGE MOUSSE @ janespatisserie.com
Facebook Twitter