Willie K. Ramirez
Monday, August 13, 2018
Facebook Twitter
Loading...
Loading...
This is an amazing Indian chicken tikka masala recipe — it’s restaurant quality, made from scratch, and easy to make. The chicken is tender and flavorful, and the sauce is creamy, thick, and decadent. It’s also low carb, keto, and gluten free.
Making your own Indian food at home without store-bought sauces may seem daunting, but in practice it’s a lot easier than it sounds. After marinating the chicken, only about 20 minutes is spent simmering the sauce on the stove. This homemade version is perfect for days when you’re craving Indian food but you don’t feel like going out to eat! 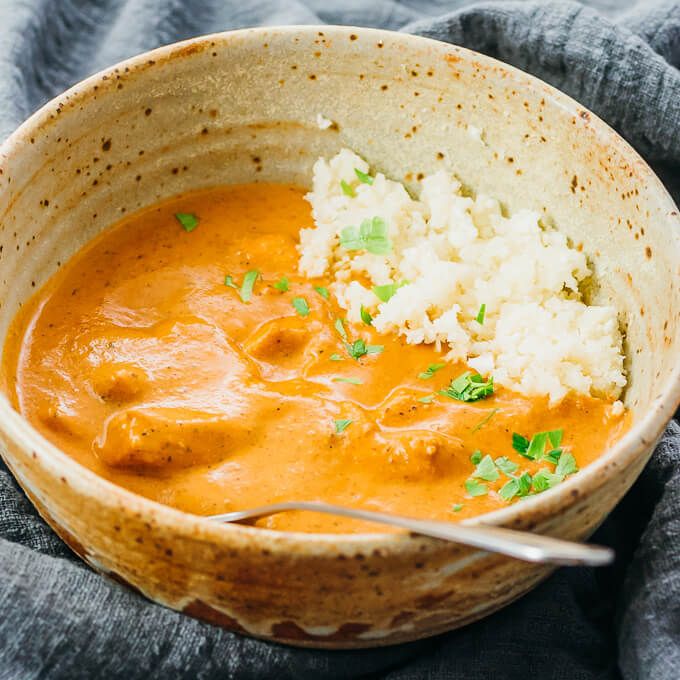 MY HISTORY WITH CHICKEN TIKKA MASALA

I use plain Greek yogurt with 2% fat, and I prefer the FAGE brand which comes in 7 ounce containers. I’ve bought them at both Trader Joe’s and Whole Foods. If you don’t use FAGE, pick one that’s relatively low in carbs, about 6g per 7 ounce container.
The marinade should have a very thick consistency that easily coats the chicken chunks. It shouldn’t be thin or watery.
The chicken should marinade for at least an hour in the refrigerator. I’ve marinated as long as a few hours and a few readers have marinated overnight.

I typically use a 10-inch nonstick pan, as shown in these photos. The pan is about 2 1/2 inches deep and has a volume capacity of 3 quarts. Any nonstick pan with similar dimensions will work well. You don’t need a lid for this recipe.
This recipe is one of several methods I’ve used to make chicken tikka masala. I also have recipes for Crockpot or Slow Cooker Chicken Tikka Masala and Pressure Cooker or Instant Pot Chicken Tikka Masala. 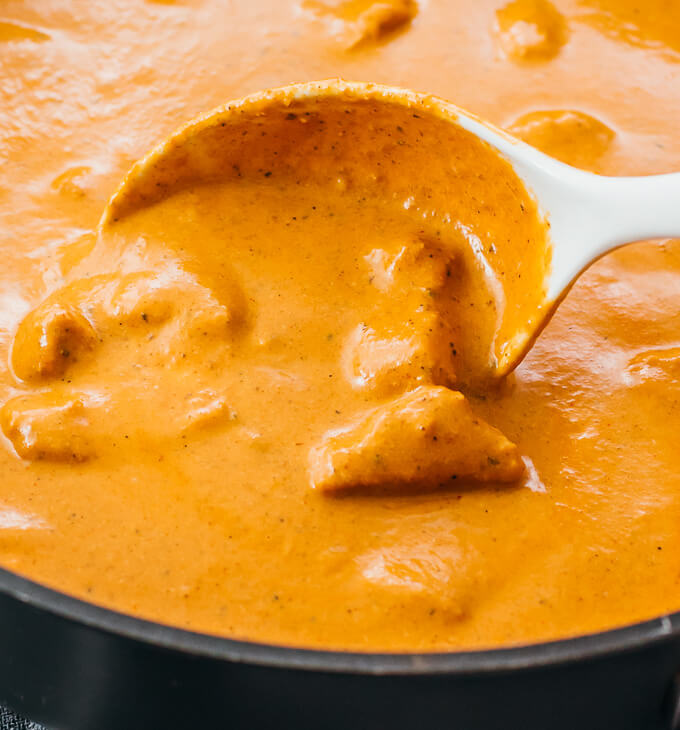 ALL ABOUT TIKKA MASALA SAUCE

What is it? Tikka masala sauce is simply tomato sauce mixed with heavy whipping cream and spices, most importantly garam masala. The sauce is simmered until thick and flavorful.
Where to buy garam masala? Garam masala is a mix of dried spices including cumin, cardamom, cinnamon, cloves, nutmeg, and others. You can pick up this dried Indian spice mix at supermarkets like Whole Foods, or purchase online at Amazon. A small amount will last you a long time, through many homemade chicken tikka masala dinners.
Is it spicy? While this sauce is certainly heavy on spices, it’s not that spicy or hot. I usually add jalapenos or cayenne, but it’s optional if you can’t handle the heat.
Substitutes for cream? I’m often asked whether heavy whipping cream can be substituted for something else. Personally, I prefer the texture and taste of the sauce with heavy cream, but I know that many readers have had success using less heavy cream, or substituting all or some of the heavy cream with half and half or coconut milk. It’ll result in a thinner sauce but will likely still taste quite good. Note that these substitutions will result in a different net carb count.
Does this make a lot of sauce? This recipe makes a very generous amount of tikka masala sauce. Extra sauce is always appreciated for pairing with side dishes (see suggestions in the next section). If you don’t anticipate needing all that extra sauce, you can certainly increase the amount of chicken so that the sauce-to-chicken ratio isn’t so high.

Given all the sauce that this recipe makes, I highly recommend preparing complementary side dishes to help sop up the extra sauce. Since I follow a low carb diet, I usually pair with plain cauliflower rice (as photographed here) instead of the usual Indian sides like basmati rice and naan.
You can make cauliflower rice a number of ways. First, you can buy pre-riced bags in the refrigerated section of many grocery stores, including Trader Joe’s and Whole Foods. This is what I usually do to save time. Or you can use a food processor or hand grater to break down cauliflower florets into rice-sized pieces. Then you can cook them by microwaving or pan-frying with a bit of oil until tender. I usually prefer the pan method as used in my bacon kimchi cauliflower fried rice recipe because microwaving can yield soggy rice.
You can also serve chicken tikka masala with a variety of vegetables including onions, tomatoes, carrots, beans, peas, cauliflower, broccoli, and potatoes. Many of these vegetables are quite high in carbs, so I usually avoid them. 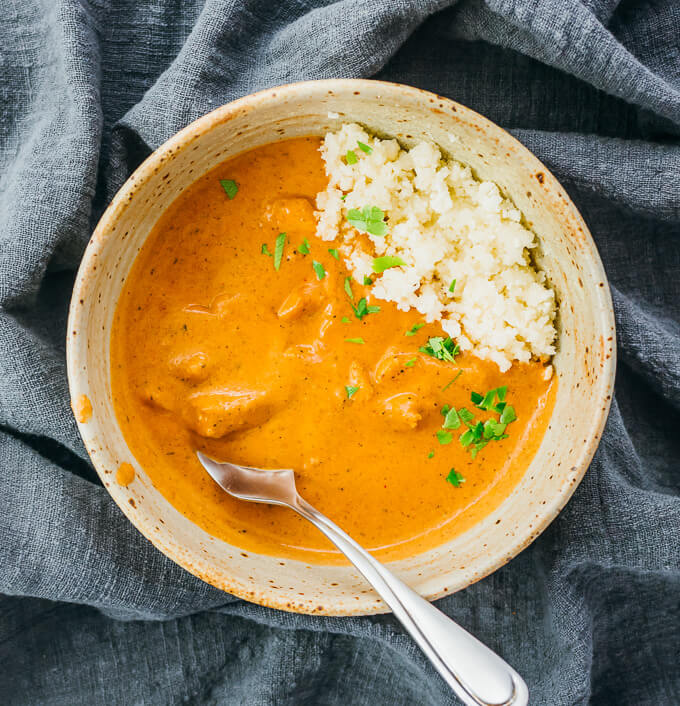 An amazing Indian chicken tikka masala recipe — restaurant quality, made from scratch, and easy to make. The chicken is tender and flavorful, and the sauce is creamy, thick, and decadent. It’s also low carb, keto, and gluten free.

For marinating the chicken: