For stuffing, used ingredients favored by the Malays like potatoes and grated cucumber that added some types of seafood meat such as pieces of fried crab, squid or other seafood that can be selected according to taste. Then where is the combination of typical Indian recipes? The combination is in the sweet peanut sauce section. 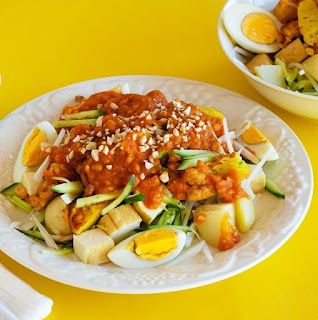 First Step :
- enter the dumplings, dry cili, garlic / big and brown sugar
.- screwed to flat and let a little boil.
- Enter the salt taste and peanut flavor ranged roughly
.- screwed to flat again, after boiling..close the flame.
- after the sponge and the vegetables are ready to put in the former field, you can spoon the soup onto it.

Next Step  :
-pench the flour & powder up into the former. chaotic.
- Put enough water, not too fluid. and mixed
.- enter also, taugeh, leaf chives and salt taste enough
.- leave in 10 min
.- heat the oil in a cauldron.
-Short order and put a shrimps
- taugeh sufficiently
- pea roughly to taste

Last Step :
- put tofu, green cili, sambal belacan, taugeh and bean kisar into a former.
- Flatten flat
.- Last, sprinkle on top of prawn which has been placed in the former dish
.- Set the boiled eggs that have been in hiris.
Facebook Twitter