Willie K. Ramirez
Tuesday, July 17, 2018
Facebook Twitter
Loading...
Loading...
Living in Japan, I tend to get overwhelmed by all the desserts sold in convenience stores, grocery stores or restaurants.  I feel there’s an overwhelming amount of sweets sold and it can be hard to stick to my diet because there’s so much temptation everywhere.  One of my favourite dessert has always been cheesecake but I haven’t eaten or made one in a few months!
A few weeks ago, someone posted a video of a Japanese Cotton Cheesecake in a Keto group on Facebook and asked if anyone could ketofy the recipe.  I decided to make one because I live in Japan and I looooove cheesecake so much, or to be honest, it was probably an excellent excuse for me to eat cheesecake! 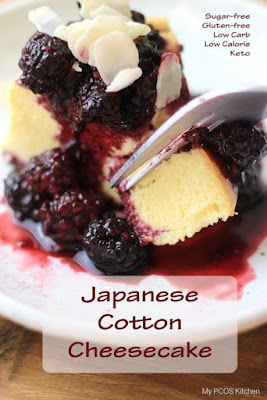 Japanese Cotton Cheesecakes are a bit different than normal cheesecakes as they are based on a meringue and are very light and fluffy.  They don’t require as much sugar as regular cheesecakes and often contain flour.  Some cheesecakes use chocolate instead of sugar and some can also add milk or sour cream.
I chose to keep it simple and only used 5 ingredients: cream cheese, eggs, blanched almond flour, stevia powder and baking powder.  I realize that when you start eating sugar-free, you tend to like things a bit less sweet than normal and so I didn’t need to add a lot of stevia because I found it was sweet enough.
A yummy fluffy and spongy gluten free and sugar free cheesecake!
Ingredients

Instructions
Recipe Notes
If you double the recipe, use a 9" cake mold and just bake it an extra 10-20 minutes at 140C/285F.
**While I know traditional cream cheese packs are 8oz, the packs in Japan are only 7oz so that's what I used for this recipe. I'm sure using an 8oz pack won't make a difference in the recipe, but if it does, try adding 5-10g of almond flour to the cake.
More Deliciouse Recipe Japanese Cotton Cheesecake (Gluten-free, Sugar-free, Low Carb) @ mypcoskitchen.com
Facebook Twitter